Anabolics.ro Review – A Scam Website That Sold Substandard Medicine To Its Customers

Anabolics.ro used to be an online pharmacy that is no longer available on the internet. When I visited the website, I was met by a message in Romanian that the domain name had been seized in accordance with the provisions of Article 249 of the code of criminal procedure. The domain name was the subject of a criminal case. This had me worried because the domain name is subject to a criminal investigation. What could the owners have done to warrant such a reaction? I did some research on some web archives and found some information regarding Anabolics.ro. I did not determine when the online pharmacy was formed.

Anabolics.ro was an anabolic steroid shop. They sold oral steroids, injectable steroids, Ancillaries, and hormones. They suggested that they were based in Europe probably in Romania because that was the authority that seized their domain. Anabolics.ro claimed to source its drugs from reputable companies such as Balkan Pharmaceuticals, Asia Pharma, Aburaihan Pharmaceutical co. in Iran, Abdi Ibrahim in Turkey and Desma in Spain. These are reputable organizations.

As a visitor, to get any form of service, you had to create an account or log in to get any form of service. I couldn’t verify what kind of information you were required to provide since the site is now unavailable. However, the website lacked a lot of information. For instance, it sold anabolic steroids but it did not state whether they were authorized by relevant bodies such as the FDA. Simply stating the names of a few companies does not mean that they sourced from them.

Anabolics.ro sold anabolic steroids but I did not find any other categories of drugs such as ED pills on the site. Some of the common pills that were sold included Winstrol Depot Desma at $5.80, Deca Norma Hellas Greece at $5.50, Testocyp Alpha Pharma at $4.58 and Legit Primobolan Depot Bayer Schering Turkey at $8.56 among other steroids. Anabolics.ro accepted payments via MoneyGram, Western Union, Direct Bank Transfer and a variety of credit cards including Visa and MasterCard.

Anabolics.ro shipped their orders inside EU and the payment for shipping was $23.08. I did not find information regarding the delivery methods or the expected duration of delivery of the product. There was no refund policy and there was no avenue to contact Anabolics.ro that was provided such as phone number or email.

Before I buy from the online pharmacies, I always ensure that I have read some customer reviews from the previous customers. This is the best way to determine whether a website is a fraud or not because they may have the best prices and an attractive website but have the worst customer services. You can find the customer reviews on the website but these are normally unreliable and tampered with. I prefer to look out for reviews on independent review websites. In this case, I visited eroids.com for some reviews. 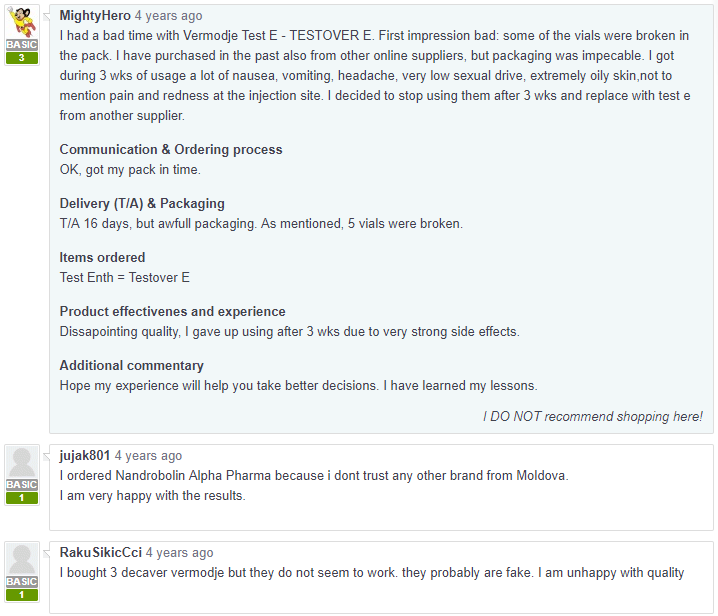 MightyHero had a bad time with a drug they had ordered on Anabolics.ro. “Some of the vials were broken in the pack”. He/she went on to say that buying from other suppliers was better with better packaging. The drugs also affected him/her negatively with nausea, headache, vomiting and low sex drive and other side effects. Overall he/she doesn’t recommend people buying from Anabolics.ro due to his experiences. Another customer jujak801 ordered Nandrobolin Alpha Pharma. He/ she was “very happy with the results”. Another user called RakuSikicCci ordered 3 decaver vermodje but “they do not seem to work. They are probably fake.” He/she is an unhappy customer.

After those negative customer reviews, I was keen to see what scam analyzing sites would make of Anabolics.ro. There are two sites that are reliable for this purpose namely scamadvise.com and scamner.com. I put Anabolics.ro to the test and made some findings.

According to scamadviser.com, Anabolics.ro is based in Romania. This did not come as a surprise because the domain name ended with .ro and the authority that seized it was Romanian. It was a European site as well. However, scamadviser.com has determined that it is from a high-risk country hence it is unsafe.

Due to the rampant competition in the online pharmacy businesses, majority offer their customers some incentives so that they can save money and subsequently buy more. This is a marketing strategy aimed at increasing sales. As a consumer, I am always on the lookouts for these discounts, offers and coupon codes. There were no coupon codes or discounts by Anabolics.ro probably because it did not exist anymore.

Anabolics.ro was an online pharmacy that was shut down and is under investigation. I did not know the cause of the shutdown or whether it was going to rebrand and re-emerge but it was a scam website when it existed before the shutdown. This is not derived from the fact that it is from Romania but due to the poor reviews from its former customers who said that it sold fake medicine with a negative impact on their health.

A site that purports to source its medicine from reputable organizations should not have very low-quality drugs which is a major concern. The drugs were not approved by FDA as well. I would not recommend buying anything from this site even if it came back. I give it a rating of 1 out of 5.